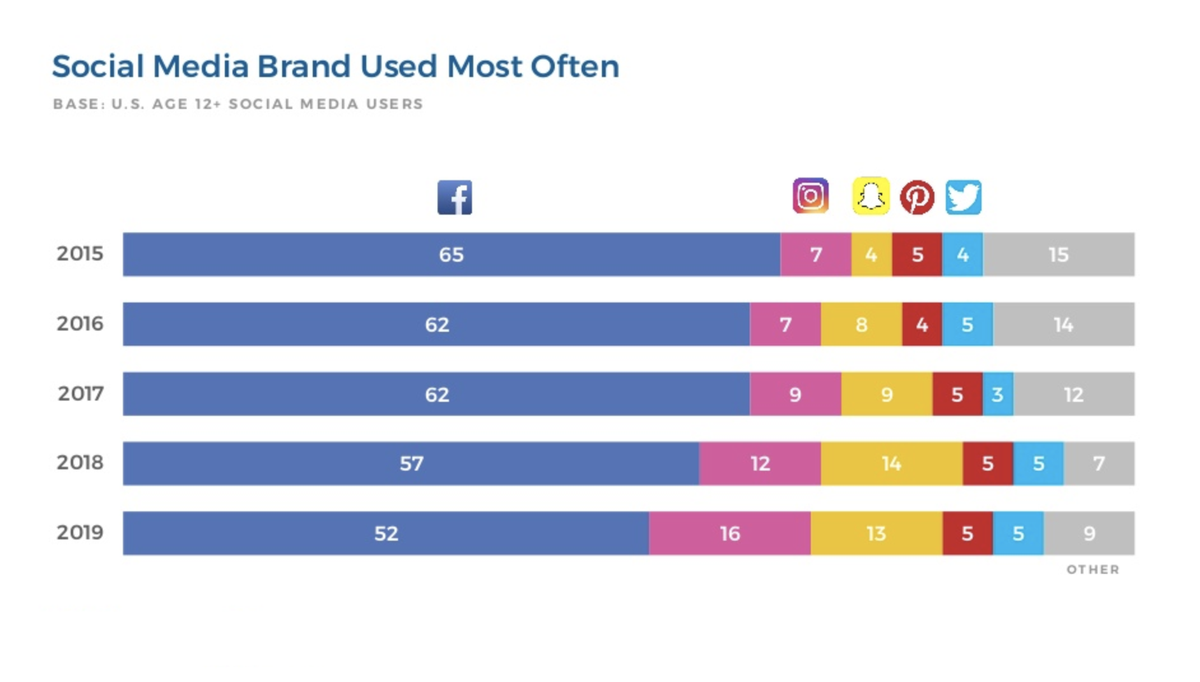 eMarketer reports the average amount of time people will spend each day on Facebook this year will remain unchanged from last year at 38-minutes. That number is expected to drop to 37-minutes per day by next year. This is a downgrade from the figures eMarketer released during the third quarter of 2018.

“Facebook’s continued loss of younger adult users, along with its focus on downranking clickbait posts and videos in favor of those that create ‘time well spent,’ resulted in less daily time spent on the platform in 2018 than we had previously expected,” said eMarketer principal analyst Debra Aho Williamson.

It’s worth noting eMarketer’s numbers are based on users age 18-years and older — meanwhile, Snapchat says it now reaches 90% of all 13 to 24-year-olds and in the U.S. There’s an entire group of users — 13- to 17-year-olds — that eMarketer isn’t including in its data.

Instagram’s expected growth. eMarketer predicts Instagram users will spend an average 27-minutes per day on the app, up a minute from last year. This number will keep growing a minute per year through 2021, according to the research firm. Even with that growth, the average amount of time on Instagram will still lag at least eight-minutes behind the average amount of time users are expected to spend on Facebook two years from now.

Why we should care. Overall, eMarketer reports the average amount of time people spent per day on social networks in the U.S. dropped by nearly 1.5 minutes last year, a number that will remain “virtually” unchanged this year according to eMarketer’s forecasts.

“Gains in digital video viewing are putting pressure on social time,” said Williamson, “And gaming is also creating new competition for user attention.” Williamson said eMarketer cannot confirm if there is a direct cause-effect relationship between the growth in these activities and social media usage, but there does appear to be a threat in terms of user engagement among the channels.

For marketers targeting a younger demographic, eMarketer’s report offers little guidance as it is not tracking usage by anyone younger than 18-years old.