What Apple’s iOS 15 means for marketers

Apple last month caused a stir among marketers and their advertising agencies with a preview of a software update that will give its customers more control over their personal data. The planned changes, estimated to launch this fall to coincide with new device announcements, will force marketers to develop alternative ways to find potential customers and engage with existing ones. A key strategy will be to position themselves as direct-to-consumer (DTC) brands that gather first-party data from consenting customers.

“With Apple turning off all these signals and going more privacy-centric, it is more important that brands get data back from the consumer,” Tim Glomb, vice president of content and data at customer engagement firm Cheetah Digital, said in an interview. “They won’t be able to use third-party data from other sources like Facebook, et cetera — it’s going to be blocked.”

The next version of the iOS software for the iPhone, iPad, Apple Watch and Mac will give Apple’s customers several ways to limit or prevent data-sharing. Those privacy features include technology to mask the email and internet addresses of Apple customers, making them less effective as a unique identifier for online tracking.

The Hide My Email feature is an upgraded version of an existing capability that lets Apple users create a randomized email address when they register with an app or website. Any email sent to those new addresses will be forwarded to a personal email account. While the feature prevents tracking the same consumer across different platforms, it still allows for one-to-one communication between brands and customers who opt into receiving promotions and offers with a compelling subject line.

“You have to double down on personalizing emails and SMS messages sent from your own website to reach people,” Glomb said. “An email is basically free to send, but you have to learn about your audience to send the right email or SMS message at the right time. You’ll make more revenue without having to spend for advertising.”

To entice people to share their personal information, marketers need to offer something valuable in return, Glomb said. They can gather information about purchase intent and consumer preferences through short surveys that offer discounts or chances to win a sweepstakes. By collecting the information directly, marketers have a basis for one-to-one connection with consumers that also respects their privacy.

“Being able to say, ‘I’ve got a million people in my database and I have a million contracts with every single one of those consumers,’ is the key to moving forward,” Glomb said.

The service will add to the difficulty of reaching consumers across websites and apps. As tech companies respond to growing concerns about privacy, they’re gradually ending support for third-party cookies, a common method of online tracking. Apple blocked all third-party cookies in its Safari browser last year. Google had planned a similar update for its popular Chrome browser for early next year, but last week it delayed the plan until late 2023.

“Marketers need to stop relying on crappy old technology that got them fat and lazy, and they need to start getting creative and thinking like human beings.”

“Marketers need to stop relying on crappy old technology that got them fat and lazy, and they need to start getting creative and thinking like human beings,” Glomb said. “How do two people meet each other on the street? They ask each other questions. They listen, they learn and then they use that information to continue the conversation and build a relationship. Marketers lost that.”

The effect of Apple’s privacy updates on marketers will depend on how many of its millions of customers use the services. The disruption could be profound, considering that the iPhone has an estimated market share of 47% in the U.S. smartphone market, according to researcher eMarketer.

Apple’s last major update to its privacy features has proven to be popular. The company in April introduced its controversial App Tracking Transparency (ATT) feature that came with an update to iOS 14. The feature notifies Apple users when apps want access to a unique Identifier for Advertisers (IDFA) that’s embedded in devices including the iPhone. Marketers use the technology to improve the targeting of online ads, and users who decline to share their identifiers are more anonymous.

As Apple prepared to introduce ATT, it faced criticism from companies including Facebook and app developers that complained the feature would reduce the value of digital advertising when people opted out of tracking. Those concerns were legitimate, considering that only 9% of iPhone users nationwide have consented to share their device identifiers, according to mobile advertising and analytics firm Flurry.

The popularity of ATT is partly attributed to its effortlessness — an Apple user only needs to tap an on-screen button to opt out of tracking. It’s less clear whether the Hide My Email and Private Relay services will be as popular. People who use Hide My Email will have to remember their randomized email addresses while using a non-Apple device such as a Roku set-top box or Windows desktop. The Private Relay service costs extra money as part of Apple”s premium iCloud+ tier.

“If you want to live in the iCloud world — and there are people who do — you can,” Dave Pickles, co-founder and CTO of demand-side platform The Trade Desk, said in a company blog. “Though I believe it’s a fairly fringe activity and don”t see it being adopted at scale.” 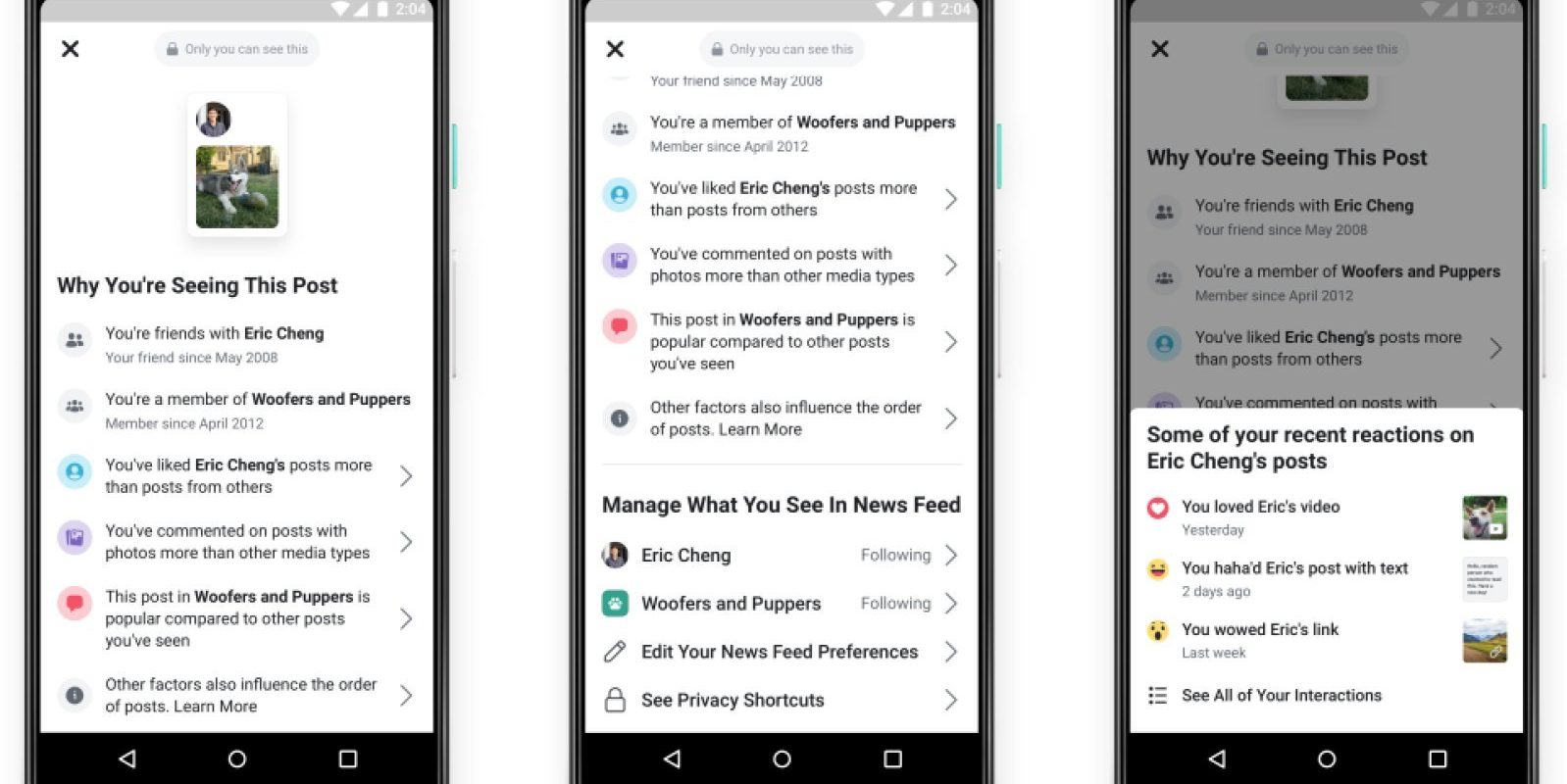 It’s also getting more transparent about the ads you come across on the site.

Facebook has announced a new feature called “Why am I seeing this post?” which will help you better understand the content that shows up on your News Feed from friends, Pages and Groups you follow. Not only that, but this will also give you more control over what you see in the News Feed, letting you easily manage the posts you interact with on the site. The company says this is the first time it has built information on how News Feed ranking works directly into the Facebook app, noting that it is part of its efforts to be more transparent with users about how its algorithms target you.

To get access to the new tool, first reported by The Telegraph, all you have to do is click or tap the drop-down menu on the right hand corner of a post. From there, you’ll be able to view info at a glance on why you’re seeing certain posts on your News Feed — e.g. because you’re a member of X Group or Page on Facebook — as well as manage the content you’d like to see more or less of. You’ll get shortcuts to controls to help you further personalize your News Feed too, including See First, Unfollow, News Feed Preferences and Privacy Shortcuts.

Facebook says that during its research for the “Why am I seeing this post” feature, which is available starting today, it learned that people wanted more than transparency on its News Feed algorithms. They wanted more control, and that’s why it decided to roll out the tools to make it simpler for users to manage the posts they see on their feed.

In addition to these changes, Facebook is updating its “Why am I seeing this ad?” tool to make it even more transparent than before. Now, on top of showing you factors like basic demographics or interests that may have contributed to an ad you came across on the site, Facebook will let you know when information on an advertiser’s list matches your profile. What’s more, Facebook is providing details if an advertiser uploaded your personal data to its database, such as email and phone number, or whether it worked with another marketing partner to try to target you with an ad.

“Both of these updates are part of our ongoing investment in giving people more context and control across Facebook,” the company said in a blog post. “We will continue to listen to your feedback and evolve these features over time.”

At a time when Facebook is under heavy scrutiny by the public and governments, it needs to be as transparent as possible with users. The new features certainly don’t solve all of its problems, but at least they’re a step in the right direction.